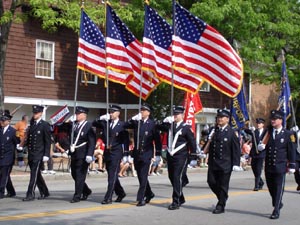 The 2015 Town of Belmont Memorial Day Parade will include local elected officials, who will march with active duty members of the armed forces and veterans who will either walk or be driven along the parade route.
Marching bands from Belmont High School, and the Chenery Middle School will also perform during the parade.

Local Boy Scouts and Girl Scouts Troops and other local community groups will also be participating.

Belmont Fire & Police will have equipment and Color Guards representing their Departments on display.

The parade participants will stop at the Town Cemetery on Grove St for a service and wreath laying ceremony in honor of those from Belmont who died defending the country including the reading of their names.