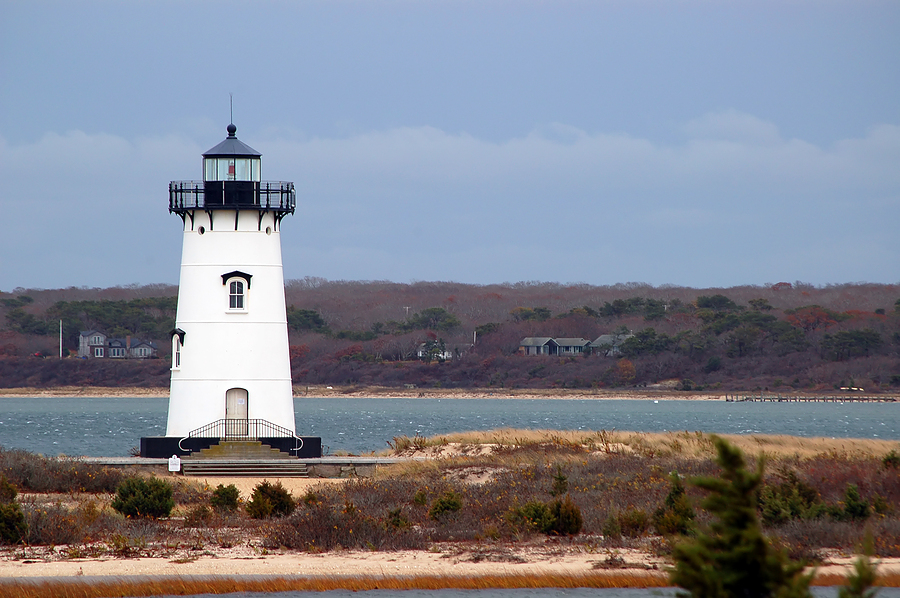 The West Chop Lighthouse – The last manned lighthouse, it was built in 1817. In 1838 the wooden building was replaced by the brick structure that exists today. It was moved back a bit from the bluff in 1848 and again in 1891. Vineyard Haven’s harbor was once one of the most important ports in the Atlantic.

The East Chop Lighthouse – Built privately by Captain Silas Daggett in the mid-1800s, it was funded by local merchants and ships passing through. The U.S. government purchased the lighthouse and its land in 1875 for $6,000 and the cast-iron structure you see today was built on the cliff 79 feet above the sea.

Edgartown Lighthouse – Built on a small man-made island in Edgartown harbor in 1828, the light was only reachable by boat for the first year until a foot bridge was later built. A new structure replaced the original one in 1938 after it was brought over by raft from Ipswich, MA. Though the new light was placed in the same spot the original one was, sand filled in the area between the island and mainland and the Edgartown Lighthouse currently stands on shore.

Gay Head Lighthouse – Build extremely close to the constantly eroding cliffs, President John Quincy Adams authorized the original wooden tower to be replaced by the red brick light in 1844. The amazing Fresnel lens with 1,009 prisms was installed in 1856 after it was proudly exhibited at the World’s Fair in Paris. The light is currently preserved at Martha’s Vineyard Historical Society in Edgartown and is lighted every evening year-round after dark.